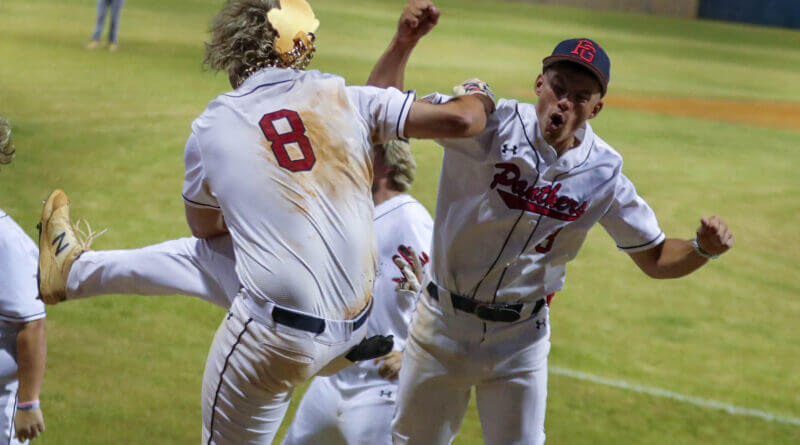 It was raining homers in Ackerman on Monday.

The Game 3 matchup between the Pine Grove Panthers and the Choctaw County Chargers totaled five home runs in the game. Three of those belonged to the Panthers, two of which sparked an incredible eleven run third inning that pushed the Panthers to a 17-6 victory and into the North Half Championship series for a second straight year.

After two slow innings for the Panthers, where they gave up three runs in the first and were forced to switch pitchers after recording just one out in the game, it seemed like it was going to be a long night for the visitors.

The Choctaw County crowd was roaring, until the state’s active leader in all-time career playoff home runs, Carson Rowland, came to the plate with a man on. Rowland crushed a two-run shot into left center field, silencing the home crowd for a moment and getting the Panther bats going.

It was just a few pitches later when Jacob Hopkins would step to the plate and blast another homer to take the lead in the blink of an eye, and not a sound could be heard on the Choctaw County side.

A lot more runs were scored in the inning, with credit to walks and RBI’s from Tanner Pannell and Coy Childs. Hopkins put some more RBIs to his name in his second at bat of the inning with a two run double.

On the defensive side of the innings for Pine Grove, things started off rocky but got to a fiery finish, as Peyton Cornelius was given the ball in the bottom of the first, to come in as a reliever. From the point on, Cornelius was electric, going all seven innings while striking out five, while only allowing three runs, seven hits, and two walks.

Hopkins was definitely the star of the show at the plate on Monday, going 4-4 with a home run, two doubles, and a walk with five runs batted in. Rowland and Pannell each had three RBIs, and Roberts brought in two.

The Panthers will definitely have a battle on their hands in the North Half Championship series against familiar foe East Union starting Friday.

The Urchins have been the #1 ranked 2A team in the state since the start of the season, however the Panthers are eager to take that from them.

The Panthers did not have the best luck against East Union in the regular season as the Urchins swept the Panthers.

“It’s gonna be challenging, but I wouldn’t want to do it with any other group but this one”, King said.

Rowland is on the same page as King as he knows the talent East Union has and knows what it’s going to take to win.

“We’re gonna have to play to the best of our abilities”, he said.

“ They are really good so, it’s gonna be tough,” Rowland said about their North Half opponent and his final game at the Grove set fort this Saturday.

“ If we swing the bat well, and pitch it and play defense well… we’ll have a chance to win”