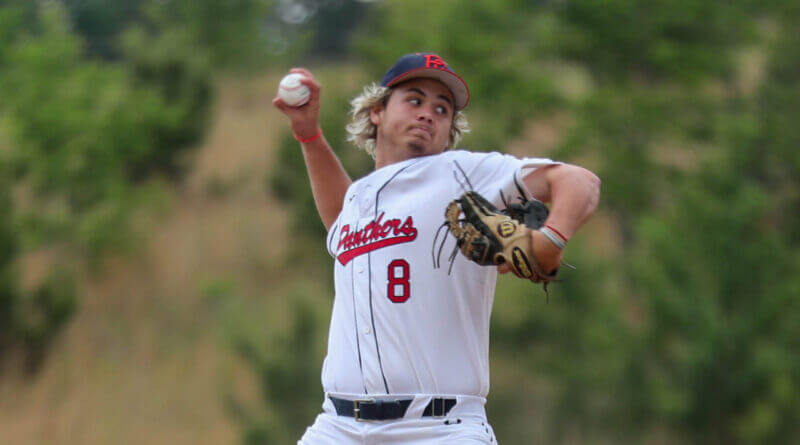 PINE GROVE–With their backs against the wall, the Pine Grove Panthers responded.

Down 1-0 in a best-of-three series against Choctaw County in the North Half Semifinals of the MHSAA Class 2A Baseball Tournamen the Panthers bounced back in Game 2 for a 9-8 win.

A decisive Game 3 is set for tonight at Choctaw County at 7 p.m.

Pine Grove got a solid outing from senior pitcher Jacob Hopkins, who scattered eight hits, struck out four, and walked five. He did surrender two home runs but Pine Grove head coach Matt King said Hopkins’ work on the mound and the defensive effort behind him made the difference. Choctaw County jumped on Panthers’ pitching early in Game 1, eventually winning 14-4 in five innings.

“A lot of it starts with Hop (Hopkins) on the mound,” said King of the difference in the first two matchups. “He’s really a competitor and he works his but off. His stuff was good. He was in the zone making good pitches all night. The defense was pretty good and we did just enough on offense.”

Pine Grove had 11 hits on the night. Coy Childs went 3-for-3 and had a two-run single in the bottom of the third to give Pine Grove a 5-3 lead. The Panthers added three more runs in the fourth, two on a single by Jacob King to lead 8-4. Hopkins helped his cause in the fifth, adding the final run on a solo home run in the fifth.

That would be a much-needed run as Choctaw County made things interesting in the seventh. A single, error and walk loaded the bases. After fanning a batter, Hopkins was lifted for Carson Rowland due to pitch count. A few pitches later, Choctaw County got a grand slam from catcher Micah Gammill to cut the lead to one.

Rowland settled in to fan a batter before getting an infield fly for the final out. King said he didn’t get nervous after the home because he was confident Rowland would close it it.

“The kid hit a 2-2 slider…off his shins about 375 feet. They can just swing it,” said King. “But Carson made quality pitches. He made pitches that he had to make, high-pressure pitches when he had to. A lot of people have probably seen him do that on the basketball floor…him performing in high-pressure situations.”

King gave the Panthers Sunday off to spend some quality time with their No. 1 cheerleaders, their moms for Mother’s Day. But today they’ll get back to business, as they prepare for the biggest game of their season.

“We’ve got to get ready for a battle in Ackerman,” said King.