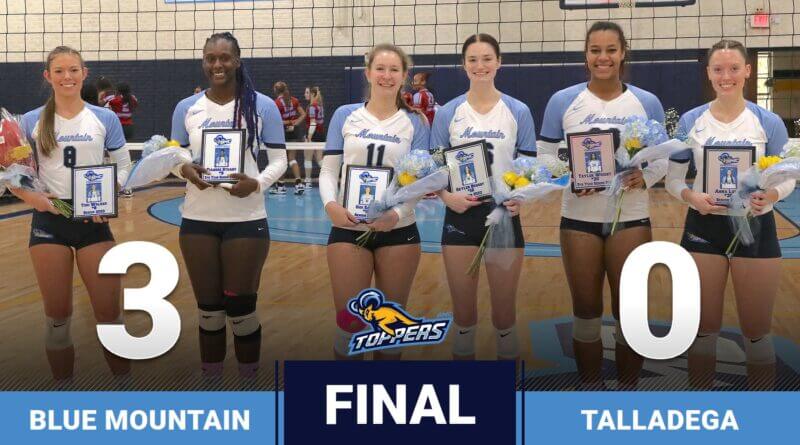 It was Senior Day for the Volley Toppers, and the seniors delivered led by Taylor Wright (SR/Huntsville, Ala.) who had 12 kills at .250, while Anna Lucas (SR/Athens, Ala.) dished out 28 assists.

Blue Mountain continues to assault defenses with aces, with six being shelled out today.

Jaiyah Jackson (SO/Alexander, Ark.) was flying all around the court, digging out 14 balls on defense for the Toppers.

The Volley Toppers have now won 15 straight, including 14 straight SSAC games.  They have also put together 21 straight-set wins.

“It was a special day for us and our seniors,” BMC head coach Reid Gann said.  “These seniors have given so much to this program and have helped us get to where we are today.  I’m so proud for them and getting this win in their final home game.”

Blue Mountain currently stands at 35th in the nation with two matches left in the regular season.

BMC (27-2, 15-1 SSAC) next plays Loyola Nov. 4 at 6 p.m. in New Orleans, La.  On Nov. 5 they will travel to William Carey in Hattiesburg, Miss. to play at 1 p.m. with regular season championship implications possibly at stake.