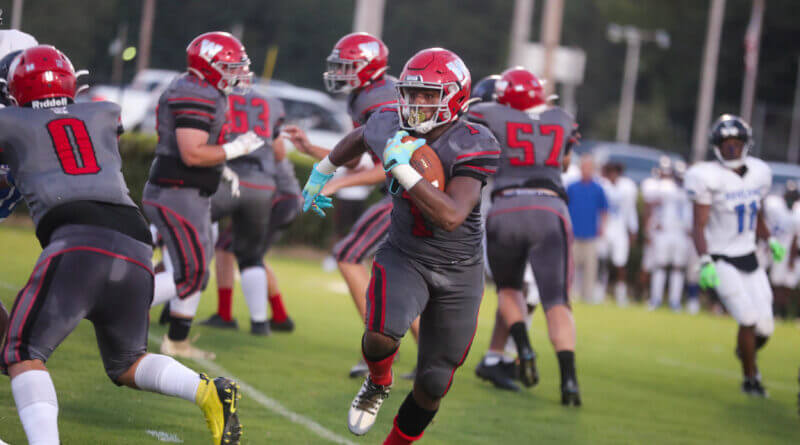 WALNUT–Walnut sophomore running back and linebacker Kemerrian Gray did everything but sell the popcorn in the Wildcat’s 40-0 season-opening win against the Ashland Blue Devils on Thursday.

Gray started the scoring in the first quarter, leaping on a loose Ashland football, forced out by Walnut defensive end Zyler Clifton. Gray went on to rush for a career-high 131 yards on 13 carries with to touchdowns of 3 and 9 yards

The 6-foot, 200-pounder had six kickoffs for 250 total yards and threw in a safety for good measure, to end the night’s scoring.

With all of that production, Walnut coach John Meeks had one simple quote about Gray. “I’m glad he found his role.”

When asked about his performance, Gray didn’t take any credit. He gave it to his teammates, like senior fullback C.J. Adams.

“I felt like C.J. was setting up some good plays…some big plays and I feel like that’s what got us the win,” said Gray. “And the offensive line did great tonight.”

Meeks had similar praise for Adams

“He’s one of those rare kids who gets just as excited about blowing somebody up as he does scoring a touchdown. That’s rare.” Meeks said.

The Walnut defense held Ashland to 48 yards of total offense, including just a net of six yards rushing. The Wildcats had 13 tackles for loss led by nose guard Cayden Armstrong with three.

Other Walnut scoring came from junior QB Drew Jackson on a 1-yard sneak, and a 2-yard plunge by Clifton, who was on the field for the first time since suffering a season-ending injury in Walnut’s first game of 2021.

Walnut became the first Mississippi to lead by the magic number of 35 forcing the clock to run continuously for you sports trivia buffs. That came with just under 5 minutes to play in the third quarter, following a 6-yard run by Mason Wilbanks.

And the huge lead also gave Walnut coach John Meeks a chance to reward some non-starters with live action.

“I was proud to get everybody in…to get some game-time experience,” said Meeks, now in his 11th season as head coach and 21st overall at the 2A school. “We still got to work on execution, but it’s always good when you can get all 40 kids in and reward them for what they do in practice because everybody out here has a role. We’re going to build off of this and keep going.”

The Wildcats now turn their attention to the Joe Bowl, their annual tangle with North Tippah rival, the Falkner Eagles. That game is set for next Thursday, at 7:30 p.m. at Walnut. Ashland will work to get better before traveling to face the Mantachie Mustangs.