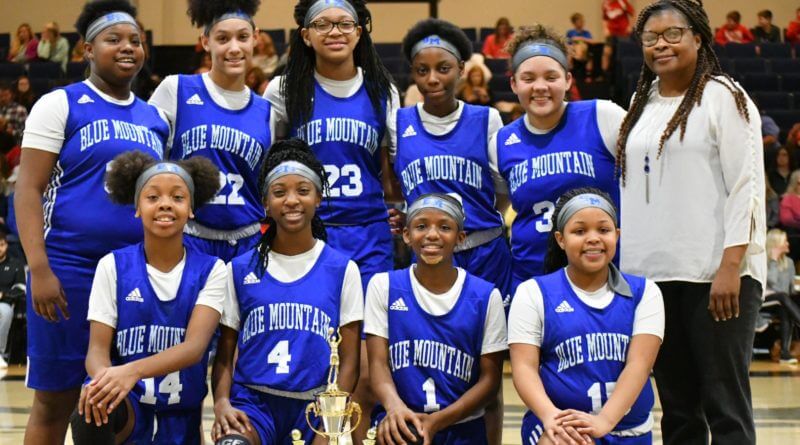 The Lady Cougars of Blue Mountain set out with a goal at the start of this season. That goal was to reach the potential they knew they had.

Blue Mountain completed an undefeated season and claimed the Five County Tournament title on Saturday with a convincing 43-14 win over West Union.

Along the way, the Lady Cougars also captured the Tippah County tournament title and set a high bar of expectations for this group moving forward.

“This group really wants to win. They work hard and I am proud of them and excited to see what they can accomplish in the future,” first year head coach Regina Chills said of her championship ball team.

In the 5 county final, Blue Mountain led 9-5 after the first quarter thanks to a Arare Foote 3 pointer, a Katherine Artberry layup and a pair of baskets from Niyah Cook.

The junior high Lady Cougars would never trail from that point forward.

The second period was highlighted by a big three pointer from Keyauna Foote and six points from Arare. Blue Mountain took an 18-8 lead into the half.

The third quarter is when the Lady Cougars blew the game wide open.

As icing on the cake, Arare drilled a deep three pointer as time expired in the third to give Blue Mountain a 35-11 lead headed into the final frame.

Blue Mountain would cruise the rest of the way to claim the championship.