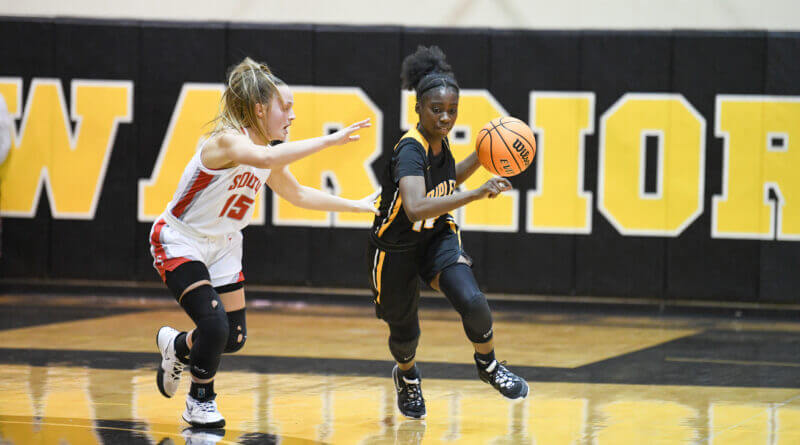 The Lady Tigers are making a habit of winning. More importantly, they are winning them when they matter.

It was a rare off night for both teams in terms of execution, but the Lady Tigers took a first quarter lead with a three from Amy Rodgers and a seven-point run before the buzzer put them ahead 13-6 going into the second quarter.

South’s Rebekah Pilcher opened the second with a three, followed by another basket, to put the Lady Cougars back within striking range, 13-11, but Alorian Story wasn’t about to let the Lady Tigers lose their lead, putting up 10 points for the Lady Tigers, and leaving them with a ten-point cushion going into the half 23-13.

Both teams came out of the locker room determined to take home the win, and play in the second half was even more aggressive than the first.  The third quarter made it apparent that the game would most likely be won or lost at the free throw line as high tension led to numerous fouls on both sides.

Pilcher finally seemed to find her groove in the fourth for the Lady Cougars, putting up 8 of her twenty-five game points.  Alorian Story was her team’s biggest cheerleader from the court as she pushed her teammates to hold their lead and Deshantae Jackson put up four points for the Lady Tigers, but it was Paris Morgan who took her moment to shine, hitting a perfect 8/8 from the line, bringing the Lady Tiger’s free throw total to 21/31 to the Lady Cougars 5/11.

After two regular season losses to the Lady Cougars, the Lady Tigers were able to hold on and took home the win 49-41.  They will take on the Pontotoc Lady Warriors tonight at 7:00 for the Region Championship.