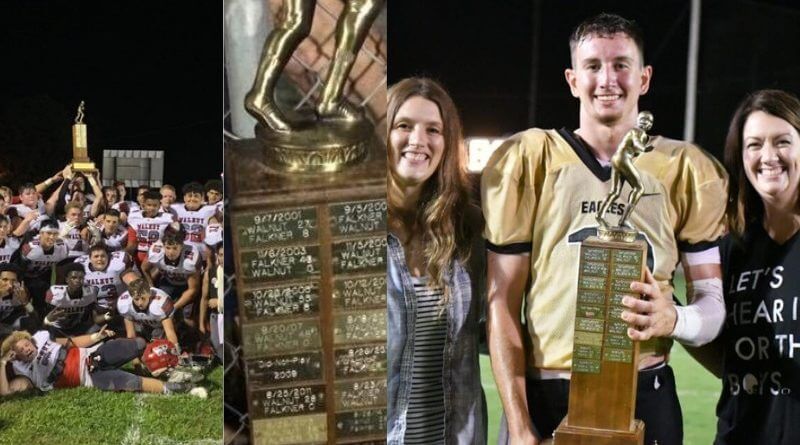 Falkner and Walnut have been rivals since long before August 31st, 2000, a 7-6 victory by the Eagles.

That game changed the trajectory of the meaning of the series between the pair that are separated by just 7 miles when former Falkner and then-current Wildcat coach Joe Horton suffered a fatal heart attack during the game.

The September 17th, 2020 marks the 20th anniversary of the first game dubbed the “Joe Bowl”, the annual meeting between the two teams.

In the time frame since the first Joe Bowl, the Wildcats have had just two head coaches in former coach Timmy Moore and current head man John Meeks. Walnut has gone 13-5 in the series since that first meeting to retake the all-time series lead 29-28-1. Falkner is on their 9th head coach since that first meeting, spanning from Kevin Walton in 2001 to Jeff Anglin today. Five of the eight coaches for Falkner who have coached in a Joe Bowl have went winless in the series.

The series has seen defensive battles, like the 21-20 Walnut victory in 2004 that was ultimately decided when the Falkner quarterback dropped the ball on the one inch line going in for a touchdown and started celebrating too early.

There have been nail biters, including three straight contests from 2013-2015 decided by a touchdown or less. That stretch will forever be remembered by the 2013 game, a 38-33 Walnut win. Falkner took the lead with just 11 seconds to play on a Jase Stroupe to Chris Blackmon 12-yard TD pass. Armani Linton took the ensuing kickoff 70 yards for the walkoff touchdown in perhaps the greatest singe play in the series history.

There have been blowouts, with each team claiming a pair of 5+ touchdown wins. There have been fireworks, none more so than the 50-34 Falkner victory in 2018.

The game has been charged with emotions more than anything, a testament to Coach Horton who was beloved in both communities.

Expect more of those heightened emotions in the 2020 edition. The Wildcats are looking to add to their series lead and continue their winning ways this season, coming in with a 2-0 record. The Eagles are searching for their first win of the season after falling to Potts Camp and Alcorn Central the first two weeks.

Kickoff is set for Thursday, Sepetmber 17th at 7 pm in Walnut.