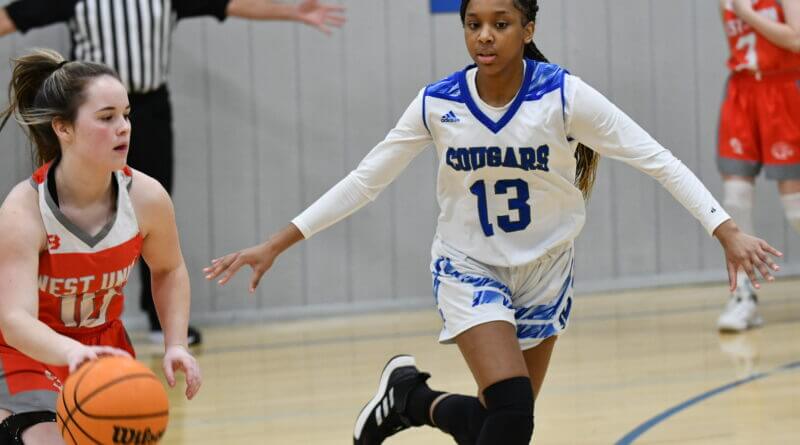 Hosting the West Union Lady Eagles in the quartfinals of the MHSAA Class 1A Girls Tournament, the Lady Cougars couldn’t overcome early foul trouble and the worst time to have a bad shooting night.

It didn’t take long for the night to start going downhill for Blue Mountain. Less than 3 minutes into the first quarter, Lady Cougars guard A Foote picked up her second foul and had to go to the bench. A huge loss according to Blue Mountain head coach Regina Chills.

“She makes the engine go…on both ends of the court. It really hurt us not having her on the floor,” said Chills.

Blue Mountain was called for over 20 total fouls while West Union committed only eight.

West Union took advantage and never looked back, countering every Blue Mountain push with a timely play from big shots to hustle plays to forced turnovers.

They had to control the game to have a chance according to West Union Head Coach J.C. Hayles.

“Blue Mountain gets up. They guard you. And that’s a big testament to coach chills and the job she does,” said Hayles. ” They give a lot of effort and we knew we would have to control the game and win the 50-50 balls. And that was the thing tonight. I felt like we really won those. Any loose basketballs, I felt like the majority we came up with and did a good enough job on the boards.”

“They just wanted it more than we did,” said Chills of the third-quarter run. “They played harder than we did. They went after the ball all night.”

The Lady Cougars were averaging over 95 points per game in the playoffs. But they couldn’t find their stroke in Round Three. They were just 2 of 11 from 3-point land in the first half. And not much better in the second half.