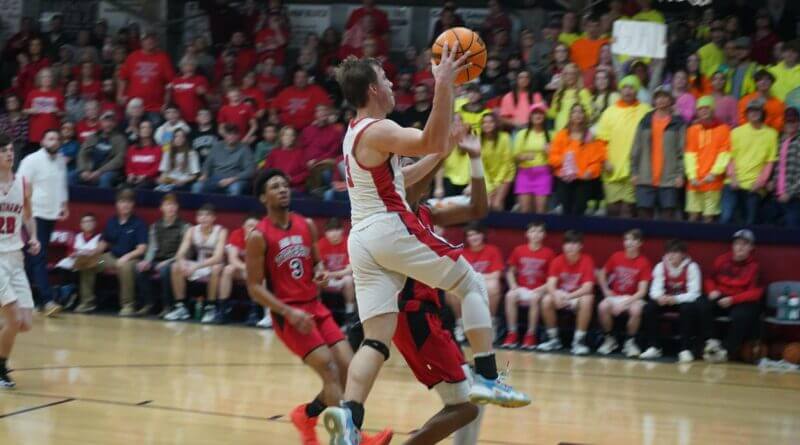 PINE GROVE–It’s no secret who plays a major role in the difference between the Pine Grove Panthers making an appearance in Jackson to compete for a state title or not.

The senior guard, known for big shots, clutch plays and getting under opponents and opposing fans’ skin has suited up for Pine Grove High School as the starting point guard for the past four seasons. He’s been the straw that stirs the drink.

He’s led the Panthers in points all four years, averaging 15 points as a freshman and 18 or more his sophomore and junior seasons.

“Dude is a competitor,” said Pine Grove Head Coach Jake Walker, who has coached Rowland his entire career. “Now he’s going to rub some people the wrong way…but I’ve never seen someone get eat up with competition the way he does. He just wants it. He wants to win.

This season, Rowland helped Pine Grove to a 21-8 record and a division title. Now he’s led them to the biggest high school basketball stage in the state–the Big House.

After their win tonight against Leflore County (12-14), Rowland has helped lead Pine Grove to their first appearance in Jackson since 1977.

“It means everything. It’s been a dream of mine, obviously, to make it to Jackson and to win a state championship,” said Rowland. “It would mean a lot, especially for all these fans that come out.

“I’d just love to do it for this team, for Coach Walker, for this community…not really for myself.”

Rowland leads the Panthers with 19 points and almost five assists per game. He is the state leader in 2A in both of those categories. His heroics are legendary, including a 4-point play in overtimelast week against defending state champs, Cohaoma County, to help put Pine Grove in the position to push toward a state title.

“Carson is a dog…He brings the energy,” said junior Jamas Cox. “He’s the first option. He’s the go-to man for this team. He makes us who we are and he’s played a big role in why we’re successful right now.”