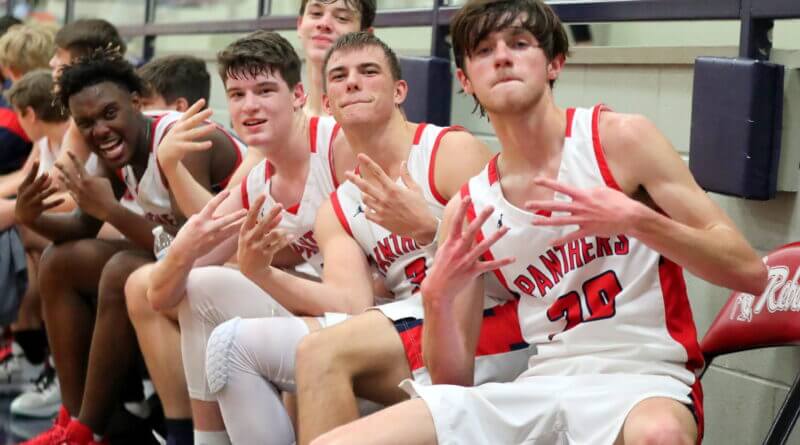 JACKSON–Pine Grove guard Carson Rowland has been a wrecking machine in Class 2A this season. He’s the main cog of a Panthers team that will take the floor today at noon in the Big House. They face Heidelberg in a MHSAA Boys State Tournament Semifinal, as they look to bring back a Gold Ball for the first time since 1977.

But he didn’t do it alone  He had some quality help.

And that help came from four juniors who make up the starting five in Jack Hudson, Jamas Cox, Keaton Wilkerson and Hayden Holcomb.

Ahead of today’s matchup, we caught up with Head Coach Jake Walker to find out just how much the foursome have helped make Pine Grove one of the four best Class 2A teams in the state.

Hudson is the second leading scorer, averaging 11.7 points. He also grabs 3.7 rebounds and a steal per game. Walker talked about his growth on both ends of the court, especially on offense.

“He’s has been our best outside shooter and  a productive wing defender for us this year,” said Walker. “Jack has has really grown in his offensive game to make him more of a threat off the dribble.”

Jamas Cox, who transferred to Pine Grove two seasons ago, sat out last season. But he’s been a key piece this year, working the block for rebounds and put-backs. Walker said Cox plays a huge role in closing down the lane, leading the team with 7.1 rebounds per game–three on the offensive end–while scoring nine points per outing.

He’s also one of the team leaders.

“Jamas is our vocal leader on defense. He gets us all in position. He’s also been a needed wall in the lane for our defense,” said Walker. “He’s so critical to our rebounding. Had a bunch of double-doubles this season.”

Cox’s last double-double game against Myrtle in Round one when he pulled down 11 boards to go along with 14 points.

Keaton Wilkerson had 8 points and 5 rebounds in Pine Grove’s huge double overtime win over Cohaoma County. The five rebounds were a testament to the progress he’s made over the season, according to Walker.

“Keaton has provided us a lot of sparks throughout the year with clutch 3-point shots. Plus he’s gotten tougher in the paint and upped his rebound game,” Walker said.

Besides being second on the team in assists with 2.1 per game, Wilkerson is also averaging 7 points and 4 rebounds.

And rounding out the starting five is Holcomb, who Walker says can be counted on to be whatever kind of player the Panthers need at that moment.

“His greatest attribute is his consistency,” said Walker  “He’s always gonna do whatever his teams needs on a given night. And he’s matured incredibly throughout the year. Always making winning plays when we have needed them the most.”

On average, Holcomb has been giving the Panthers 6.7 points and 3.3 rebounds per game.