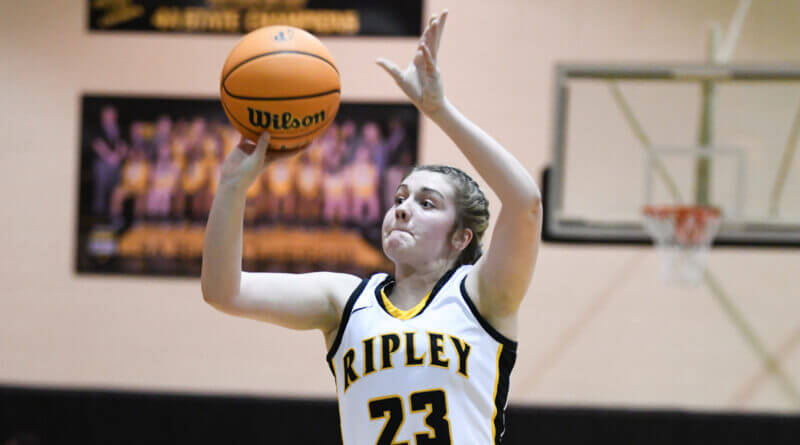 Houston won the tipoff, but Ripley’s 23 Amy Rodgers put up a long three to get the Lady Tigers on the board first.  That basket would be the first of 23 Rodgers’ seven threes for the night, setting her up as the leading scorer for either team with a total of 21 points.

Both teams were evenly matched through the first quarter, with the Lady Tigers only leading by 3, 9-6.  However, by the second, the Lady Tigers were starting to pull further ahead, with number Rodgers yet again opening play with a three pointer. 23 Rodgers third three came near the end of the half and was followed directly by a three from 15 Deshantae Jackson to round out the Lady Tigers points for the half, leaving them up 22-14 headed into the locker room.

Ripley made their case as a definitive playoff team in the second half.

The Lady Tigers started the last half of play on fire, with five threes in the third quarter: two each from 23 Rodgers and 11 Sarah Childs, and one from Jackson.

Houston’s 30 Amber McIntosh, who led the Lady Toppers with 13 points for the night, and 15 Saraya Crawford finally found their groove for a three pointer each, but the Lady Toppers came up short of matching the Lady Tigers.

The Lady Tigers headed into the final quarter of play up 41-24, with 35 Alorian Story opening the fourth with two, followed by another of 23 Rodgers’ threes.   Despite the deficit, the Lady Toppers never stopped fighting, with 10 Janasia Parker and 32 Trinity Buggs finally getting points on the board.  But it was too little too late, and the Lady Tigers took the victory 59-39.