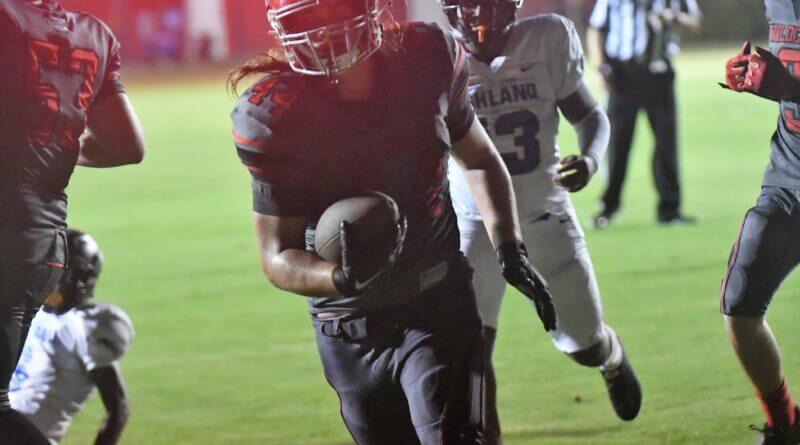 POTTS CAMP–When the Walnut Wildcats and Potts Camp Cardinals squared off in the regular-season finale for both teams, the winner would extend its season at least one more week, and the loser would be turning in equipment and making plans for next year.

The Walnut Wildcats will be playing this Friday night.

On the back of a heavy dose of 6-1, 255-pound running back Zyler Clifton in the second half, a blocked extra point by Dylan Mayo, and a second Potts Camp point-after miscue, the Wildcats survived the road test for a 20-19 win.

Walnut evened its record to 5-5. More importantly, the Wildcats secured the No. 4 playoff seed in Div. 1-2A. They’ll travel to face Eupora, the No. 1 seed from Div. 2-2A to start the Class 2A playoffs.

Over the summer, Walnut coach John Meeks said making the postseason was at the top of the list of goals for the season, especially after the Wildcats missed the playoffs last year, snapping a streak of 10 straight appearances.

“Man it was a great feeling,” said Meeks of when the final buzzer sounded and he knew his squad would be in the playoffs.

Potts Camp scored on the final play of the second quarter with no time on the clock. Mayo’s block of the extra point made it 6-0 heading to the third quarter. The Cardinals received the ball but their third play ended with a fumble recovered by Walnut.

On the Wildcats’ first drive of the second half, Clifton, a bruising tailback described as “sneaky” fast got his first carry of the game. Meeks must have seen something he liked because he gave it to Clifton 14 more times over the final two quarters.

Trailing 13-6 late after a 45-yard TD pass by the Cardinals’ Peyton Aldridge, Clifton’s 7-yard TD run with 3:10 to play in the third quarter, pulled the Wildcats to within a point at 13-12. His 10-yard score with 7:44 remaining in the game gave Walnut its first lead of the game. He added the most important points of the game with the decisive 2-point conversion to make it 20-13.

And while they utilized the ground game, Walnut didn’t do anything fancy. They just lined up and ran it right at Potts Camp. Simple. But very effective.

“We went heavy,” said Meeks.  “I had Cayden (Armstrong) and C.J. (Adams) lead blocking and Zyler toting the rock. We ran lead left about 12 of 16 carries”

Potts Camp managed to score with 1:02 to play to make it 20-19. But The Walnut defensive line blocked the long snapper into the line of the kick, which bounced off the player’s helmet keeping Walnut ahead in the wildest of fashions.

“I was so happy for these seniors. They worked so hard, kept the faith thru the losing streak, and had a great attitude,” said Meeks. “They really deserved it, and I’m so glad they were able to reach the goal.”

Adams had 34 yards on six carries and caught an 11-yard TD pass from Drew Jackson, while Kemarrion Gray had 69 yards on 15 carries. Armstrong led the defensive with nine tackles, six solo.