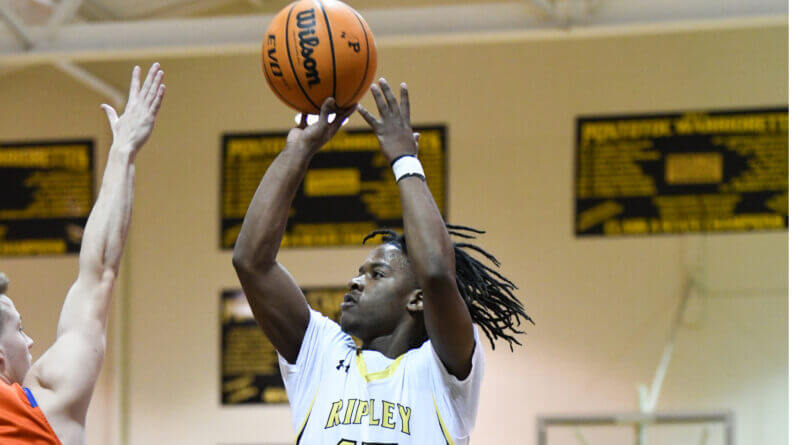 Despite falling to Ripley twice during the regular season, the North Pontotoc Vikings looked as though they might be able to pull off the upset if they ever found their groove, but the Tigers took off after the half and never slowed down defeating the Vikings 77-50 and setting up a rivalry showdown for Thursday night at 8:30 against the Bulldogs for round two.

The first half was a battle fought from behind the three-point line with 12 threes between both teams, 8 for Ripley and 4 for North Pontotoc.  Elijah Edgeston immediately set things in motion for the Tigers with two threes taking his team to a quick 6-1 lead.  Eli Baker drained a Viking three but was quickly countered by two more threes for the Tigers courtesy of Seth Thomas and CJ Martin.

The Vikings went 4/6 from the line to keep within striking distance, but a basket from LaBron Vance left the Tigers up 16-7 at the end of the first.

The Tigers held steady at four threes in the second quarter courtesy of #1 Chazton Crudup and Edgeston (2), while the Vikings upped their take to three courtesy of Baker (2) and Nick Burchfield.

Despite their field goal percentage increasing, the Vikings still fell short, outscored by the Tigers 18-14, and leaving the Tigers on top going into the locker room 34-21.

The Tigers had their highest scoring quarter during the third, besting the Vikings 28-13.  LaBron Vance led scoring in the third with 10 points, followed by LaTrell Vance with 9, and Edgeston with 7.

The Vikings were led by Aiden Tatum and Burchfield with 5 points each in the quarter.  This explosive quarter of play gave the Tigers a cushion of 62-34 going into the final quarter.

Despite trailing the Tigers, the Vikings hustled until the final buzzer. 4 Eli Baker led the Vikings with 9 points in the fourth, bringing his total to 18 for the night.  Edgeston led the Tigers in the fourth and for the night with 29 total points, followed by Labron and LaTrell Vance with 12 points each, and Crudup with 8.  Lakin Cox put up the last goal of the game for the Tigers sealing their victory and advancement to round two of the Region Tournament with the 77-50 victory.