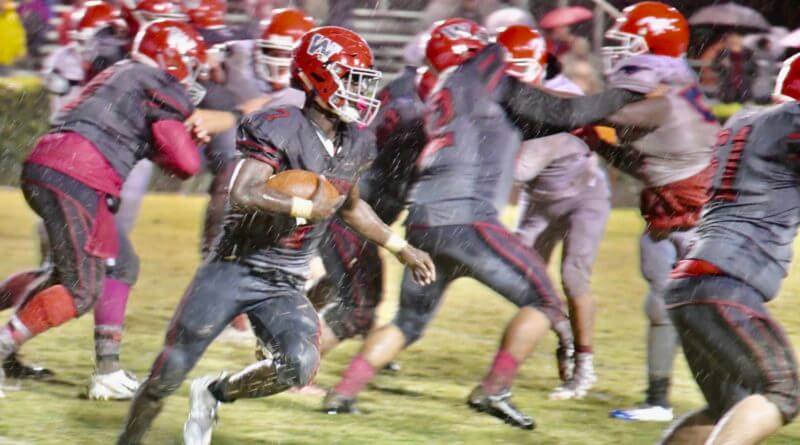 The Walnut Wildcats and coach John Meeks are in familiar territory after Friday night’s come from behind win over Strayhorn.

On a muddy field in less than ideal conditions, the Cats clinched their 7th straight playoff appearance with a 20-17 victory over Strayhorn. The Wildcats will be at home to open the 2A playoffs.

Strayhorn answered back by sticking to their Modus Operandi despite the constant rain and threw a 34 yard touchdown strike on the first play of the 2nd quarter to take a 7-6 lead.

Walnut, sticking to the run using Colom and TJ Luellen to drive the field, got Colom’s 2nd rushing touchdown of the evening on the ensuing posession.

The two teams continued sticking to their guns, with Walnut relying almost exclusively on the run and Strayhorn airing it out.

Given the field conditions, the Walnut gameplan paid dividends.

The Wildcat defense stiffened in the fourth quarter, causing a pair of Strayhorn fumbles both recovered by James Hinson and the Walnut rushing attack iced the game with Colom’s 3rd rushing touchdown of the night.

The team immediately celebrated the final whistle with mudslides and jubilation. The team is guaranteed an additional home game this season.