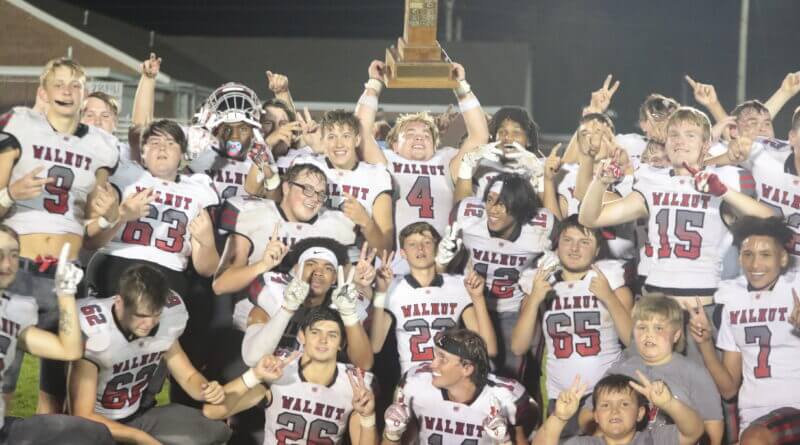 Walnut turned in a wire to wire finish, getting a first quarter touchdown on the groundand adding a passing touchdown as time expired in the fourth quarter to claim the 20th meeting of the Joe Bowl 46-0 over Falkner.

The Wildcats scored from all over the field to take the third straight Joe Bowl, putting up a trio of rushing scores, a defensive touchdown and a pair of passing touchdowns to keep the trophy at “the school up North” for one more season.

The Eagles had a turnover on downs to start the game and then created a turnover after recovering a CJ Adams fumble on the first Wildcat possession. Eli Dollar got the scoring started with a 13 yard touchdown with 4:47 to play in the first quarter and a 6-0 Wildcat lead that Walnut would never relinquish.

The Wildcats would add a Tyler Trussell 48 yard interception return and a second Dollar rushing touchdown to take a 20-0 lead in to the half.

The Wildcats defense held the Eagles to just 13 first half yards and continued to put pressure on the Falkner offense throughout the second half, racking up 9 tackles for loss, a pair of sacks and six quarterback hurries.

AJ Crum wouid find Aaron Cabriana wide open for a 33-yard TD pass on the opening possession for the Wildcats, and they would continue to pile on the points in the second half.

CJ Adams added a 3 yard touchdown plunge and James Hinson would put up a 12 yard scamper in the fourth quarter.

Third string quarterback Adrian Palmer would connect on a touchdown pass to Austin Jones as time expired to finish out the scoring.