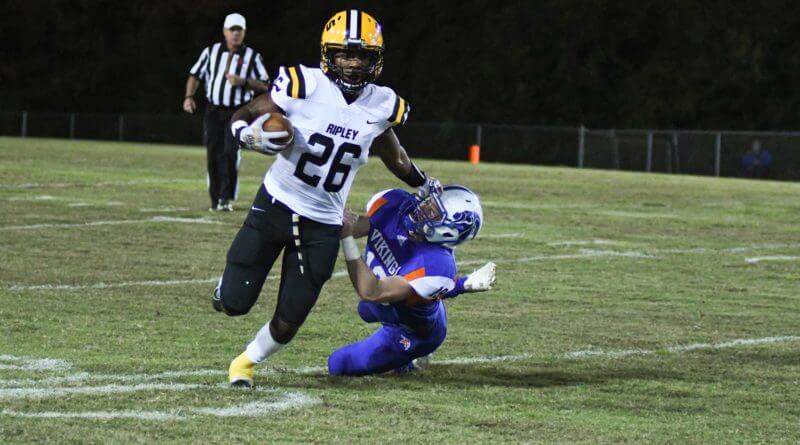 Ripley coach Perry Liles has had high praise for his defensive backfield all season, calling them out as ball hawks in practice.

The ball hawks came ready to eat on Friday.

The Tigers generated five interceptions against North Pontotoc and rode those momentum swings to a 35-21 victory over the home team Vikings to claim their first district win of the season.

After the Tigers started the game with a 3 and out, the Ripley defense got their first interception of the game which led freshman quarterback Ty Long hitting Immanuel Griffin for a nine yard touchdown pass to give the Tigers a 7-0 lead. Ripley would never trail from then on.

“I keep saying that Long plays within the offense, especially for a freshman. He doesn’t force throws and has done a good job for us,” Liles said of his freshman signal caller.

The Vikings tried to gather momentum in the second quarter with a Kaden Wilson 65 yard kickoff return and a Reece Kentner scramble for a 9 yard touchdown on 4th and goal to cut the lead to 21-7, which was followed by a quick three and out by the Tigers.

The Tigers again picked off Kentner which again led to Long hitting Griffin for a 44 yard TD pas and a 28-7 lead with just 25 seconds to play until halftime.

The Vikings would quickly answer through the air with Kentner connecting to Winn Navrette for a 22 yard touchdown.

The Ripley 28-14 halftime advantage would be cut to just 7 to start the second half, with a 23-yard touchdown pass from Kentner to Navarette to go in to the final frame Ripley leading 28-21.

The Tigers defense would hold and Long would connect with Diamante Williams on 4th and 10 for a 12 yard TD to seal the game.

Chazton Crudup led the Tigers with three interceptions. Mookie Williams and freshman C.J. Martin each had an interception apiece.

Ripley moves to 1-0 in district play. They have homecoming this Thursday against TCHS.