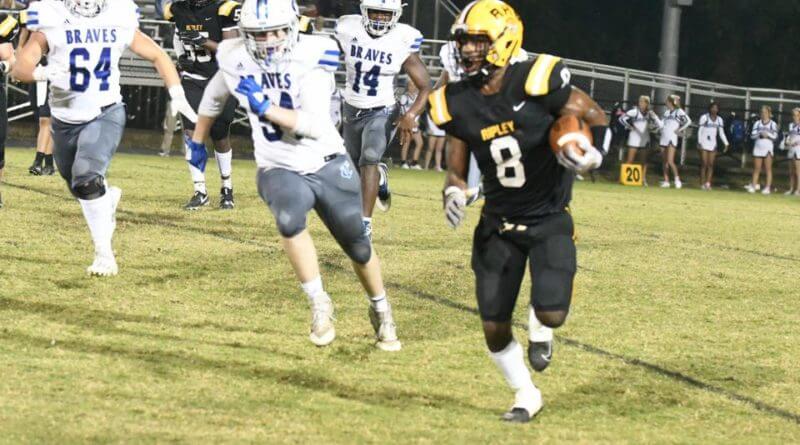 Ripley had several incentives to win their Friday night game: it was a key district matchup and Homecoming.

The Tigers had just the thing that was needed to come up with the victory. A solid offensive gameplan that played to their strengths and a defense that worked to get the ball back every chance they could get.

A well executed gameplan ended in victory for the home team, as Ripley took a big first lead and pitched a second half shutout in a 28-7 victory over Tishomingo County.

“Our defense has played great for us the last two weeks and they have really bailed our offense out in the second half. We have some things to clean up, but a win is a win, especially on homecoming,” Ripley head coach Perry Liles said of his teams victory to move to 3-3 (2-0) on the year.

The Tigers got the scoring going with an Immanuel Griffin 5 yard touchdown run late in the first quarter before seeing their extra point blocked to take a 6 point lead over the visiting Braves.

Tishomingo County would immediately answer back with a Blake Counce to Gavin Crocker 5-yard TD pass and a Scott Robinson PAT to take a 7-6 lead.

It would be all Tigers from there.

“We answered back and kept trying to work the ball to the outside. Tishomingo County did a good job of bottling our run game up the middle, but we kept working outside and knew eventually we would find some gaps,” Liles said of the Tiger gameplan.

Ripley got on the board on their first drive of the second quarter on another Griffin 5-yard TD run. A Shaundell Carter 2-point conversion run gave Ripley 14-7 lead.

The Braves would mount a drive towards the end of the first half that was stopped by a Labron Vance red zone interception. With under 2 minutes to play, Ty Long would hit Shaundell Carter for a 54 yard pass followed by a 14 yard TD to give the Tigers a 22-7 advantage. Vance added his second interception on the final play of the half on a Tishomingo County hail mary.

“We hit a big pass play at the end of the first half and that gave us the momentum going in to the second half. Vance did a good job being in position on his interceptions,” Liles said of his teams halftime advantage.

To start the second half, Ripley worked a methodical drive that ended with Griffin getting his third touchdown on the ground with an 8-yard run and a 28-7 advantage to end the scoring on the night.

“We kept telling our kids they had to finish and we couldn’t put any more points on the board and had some trouble moving the ball in the second half. We will work on that this week, because this is two weeks in a row. Winning teams finish, and that is something we are still working on,” Liles said of his teams inability to add to their lead.

The defense, however, continued to play dominant defense.

Savion Brooks got the 3rd interception of the night for Ripley with just :38 second to play in the third quarter to stop another Tishomingo County drive.

The game was sealed on a Caleb Leatherwood pefectly timed sack as Ripley was able to finish homecoming in the victory formation.

Ripley is on the road next week against Choctaw County before returning home for a key matchup against Corinth.