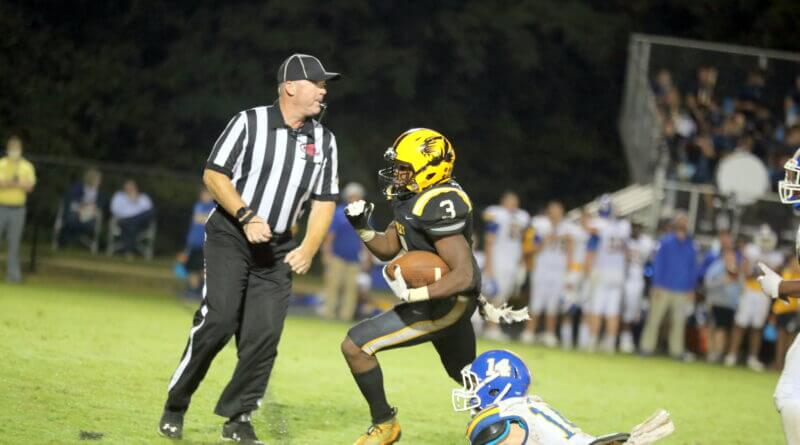 CHECK OUT THE FULL PHOTO ALBUM

The Ripley Tigers hadn’t gotten a win against their rivals from Booneville since 2008, a span that included 6 losses.

A dominant defensive performance and three big plays proved to be just the recipe to break the streak,

Ripley held the Blue Devils without a touchdown until the game was essentially over and started the scoring themselves with a 95 yard Tyler Rucker kickoff return touchdown to take a 21-9 victory over Booneville.

The win moved Ripley to 4-1 on the season and put them back in the win column before district play starts.

Ripley got the Rucker touchdown and then held the Blue Devils in check for the entire first half to take a 7-0 lead into the break.

The second half was the Immanuel Griffin Show.

Griffin answered after Booneville connected on a 27 yard field goal in the third quarter, taking the first Ripley offensive play after the first Blue Devil points 69 yards for a touchdown and a 14-3 lead.

After Ripley’s defense forced a pair of Booneville punts, Griffin again scored on a 4th and one play, this time from 35 yards out for a 21-3 lead with 8 minutes to play in the ball game.

Ripley would force a turnover that was recoved by Cooper Davis at midfield, then turn the ball over to Booneville who would get their lone touchdown with under 2 minutes to play. Ripley would recover the ensuing onside kick to ice the game.

Ripley hosts North Pontotoc next week for their 3rd straight home game. Booneville is on the road at Kossuth.

Ripley starting QB Ty Long did not play. Fellow sophmore Clay Adams took the majority of the snaps and did a great job running the Tiger offense.