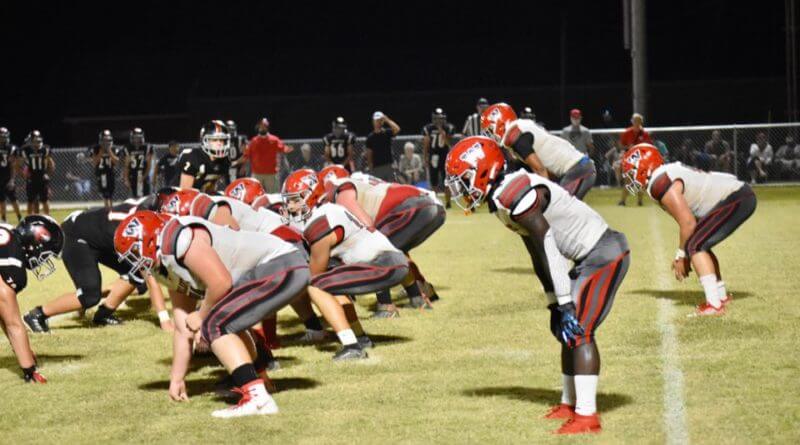 The Wildcats of Walnut have used an age old formula in winning their first two games of the season.

Create more turnover than you give up, run the ball, and use timely passes to get into the end zone. All three were on dispay as Walnut trounced Myrtle 39-13 in the first game at their new facility to move to 2-0.

The Wildcat defense was on full display Friday night at Myrtle, forcing 5 turnovers and constantly keeping the Hawks offense out of their comfort zone.

“Our defense has really done a great job these first two weeks, putting points on the board and giving our offense great field position,” Wildcat Coach John Meeks said of his teams effort on Friday.

Walnut wasted no time getting on the scoreboard with a thirty yard touchdown run by TJ Colom on the opening possession.TJ Luellen added the next score on a one yard plunge to put the Cats up 14-0 at the end of the first.

The defense forced two turnovers on downs in the second quarter, both in the red zone before TJ Colom connected on his second touchdown run a thirty-six yard scamper with 1:28 left in the half to give Walnut a 21-0 lead at the break.

Colom would contribute 164 yards on just 7 carries, providing the big play that Walnut fans have become accustomed to.

Momentum was on the Wildcat side starting the third and on Myrtle’s opening possession TJ Luellen forced a fumble and CJ Adams took care of the rest, scooping it up and returning the ball 45 yards for another touchdown to go up 27-0, effectively putting the nail in the coffin to start the second half.

Myrtle got on the board late in the third quarter with a circus play as Myrtle connected on a 15 yard pass from quarterback Jackson Mayer to wide receiver Jaden Taylor.

The Wildcat offense answered right back as Cade Hunt connected with tight end Eli Dollar on a 14 yard pass with 11:53 left in the game, extending the lead 33-7 and effectively putting the game out of reach.

The defense forced their fifth and final turnover of the night on downs with 9:06 left.

Tyler Trussel scored the final touchdown of the night for the Wildcats on a five yard run to go up 39-7. Myrtle answered right back with a kickoff return for a touchdown by Gabe Medlin for the final score of the night.

Walnut moves to 2-0 and they take on Falkner Thursday in the Joe Bowl.