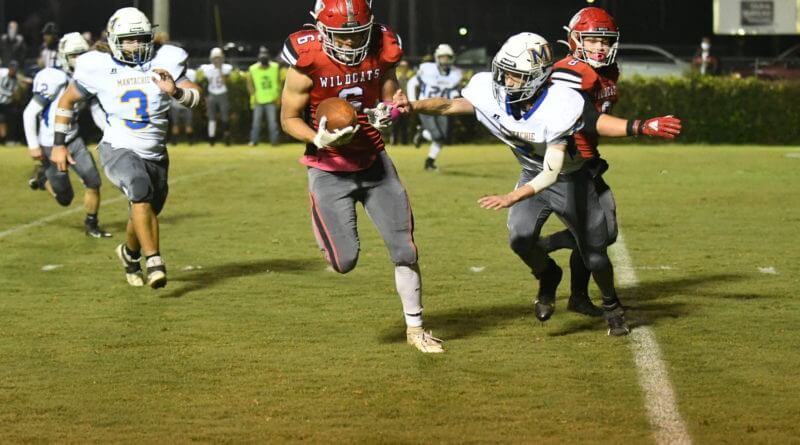 Walnut picked up a gritty win at home on Friday over the Mantachie. It guaranteed at least one more home game for them.

The Wildcats dispatched the Mustangs 36-21 thanks to a balanced offensive attack and a strong second half defensive effort.

Mantachie started the game with a long drive and attempted an onside kick on the ensuing kickoff which Walnut fielded at midfield. A pair of hard runs from TJ Colom, a Cade Hunt completion to TJ Luellen and a pair of unsportsmanlike penalties against Mantachie set up a one yard plunge by Hunt. A Colom 2 point conversion gave Walnut an 8-7 lead.

Mantachie would answer back with another long drive and another short touchdown to retake the lead.

Keeping with the theme of grind it out drives and short touchdowns, the Wildcats would answer back.

Hunt would hit Brandon Shields on a crucial third down conversion then 3 plays later Colom would take a three yard touchdown in to tie the game at 14. A Luellen two point conversion would give the Wildcats a 16-14 lead.

A crucial series of plays followed.

Walnut forced a Mantachie punt. Hunt would hit Shields on a 14 yard pass then Luellen on the games longest play with a 52 yard touchdown strike and a 22-14 lead with just 35 seconds to play in the half.

On the kickoff, a skirmish on the sideline led to multiple players being ejected, including Wildcat standout TJ Colom.

Walnut would respond in a big way in the second half.

The Wildcats held Mantachie to just 67 second half yards and Luellen would add a pair of scores to put the game away.

Walnut hosts MS Palmer in the first round of the playoffs.